ANIMA CHRISTI RETREATS
THIS IS MY BODY GIVEN UP FOR YOU 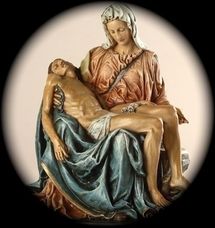 We hope everyone enjoyed the day of reflection and we invite you to join us on future Anima Christi retreats.  Here are the mp3 recordings of the two talks given by Father Dan during the day of reflection, as well as a few of the sources he referenced.  Please feel free to download these files to your iTunes or mp3 player.  We also invite all retreatants to submit a "Retreat Feedback Form" to help us plan and organize future days of reflection.  Thank you!

Father Dan quoted from Pope John Paul II's "Letters to Priests."  A full index of all of JP II's letters can be found on the Vatican website <HERE>.

There is also a very beautiful autobiography, HE LEADETH ME, by Father Walter Ciszek, that Father Dan referenced in his second talk. This book is available on www.Amazon.com and from other book retailers.  Here is the description from the Amazon website:

"He Leadeth Me is the deeply moving personal story of one man's spiritual odyssey and the unflagging faith which enabled him to survive the horrendous ordeal that wrenched his body and spirit to near collapse. Captured by the Russian army during World War II and convicted of being a "Vatican spy," American Jesuit Father Walter J. Ciszek spent some 23 agonizing years in Soviet prisons and the labor camps of Siberia. He here recalls how it was only through an utter reliance on God's will that he managed to endure. He tells of the courage he found in prayer- a courage that eased the loneliness, the pain, the frustrations, the anguish, the fears, the despair. For, as Ciszek relates, the solace of spiritual contemplation gave him an inner serenity upon which he was able to draw amidst the "arrogance of evil" that surrounded him. Learning to accept even the inhuman work of toiling in the infamous Siberian salt mines as a labor pleasing to God, he was able to turn adverse forces into a source of positive value and a means of drawing closer to the compassionate and never-forsaking Divine Spirit.  He Leadeth Me is a book to inspire all Christians to greater faith and trust in God-even in their darkest hour."