A Lenten Reflection:  The Spirituality of the Cross
by Mary Kaufman (www.incarnateinstitute.org)
(Source:  www.RCSpiritualDirection.com) 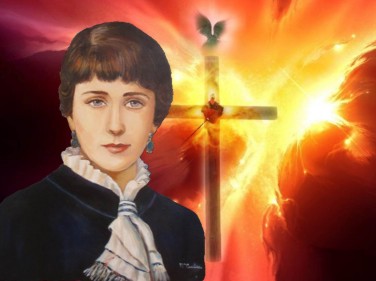 TO MY PRIESTS:
Excerpts of Jesus' confidences regarding priests given to Conchita Cabrera de Armida.

No Priests who takes the path of the Cross will be lost, and all priests who voluntarily, who lovingly embrace the Cross are sanctified and reach eminent degrees of union with Me. This is the great secret of sanctity in a priest. THE CROSS, this is the great antidote against temptations of all kinds.

My eternal gaze on my priests, my most pure gaze of love of election, envelops them eternally and embraces not only their chosen soul but the thousands of souls as well since each priests is the head of many other souls.

Pg. 89 - TO MY PRIESTS (Mystical Incarnation of Priests ... Conchita)

..."What I love most in priestly souls on earth is the reflection they bear on themselves of the fruitfulness of my Father. In Him, I love them and for the sake of Him, I save them. These souls bear the germ communicated from heaven for reproducing Me in souls and on My behalf the virtues that ought to sanctify and save them from a thousand dangers that I know. But priests souls indispensably have to be victims. They have to be converted into a gift renouncing themselves and making themselves a pure offering to my Father in union with me and surrendering themselves in self-donation for souls, as I am, within my Church and her teaching. There are priestly souls, consecrated with the priestly anointing in the world as well. There are priestly souls who, although without dignity or consecration of the priest, have a priestly mission because they offer themselves in union with me to the father as an immolation that is pleasing to Him. These souls powerfully help the church in the spiritual arena and will have a special reward in heaven. But for these souls too, their transformation into Me is indispensable.

How does this transformation operate most perfectly?

By the Mystical Incarnation, in which every priest ought to carry in a deepest, most intimate and most familiar manner, although respectfully, in as much as it occurs on the Altar daily in the sacrifice of the Mass.

Here the Word takes on flesh -so to say- in each consecrated host which is transformed into Jesus by means of transubstanciation. But at the same time, He is Jesus, the trace of the incarnation remains in His soul which the priest needs to safeguard in his heart, with all the resoluteness of love, with all the force of his fervor, with all the avidity of his desires, with all the humble tenderness of his maternal affection.

In a certain sense the priest incarnates Jesus in the host but as priest he becomes Jesus to offer the priests to the Father, transformed into Jesus, so he also is host, so is he victim, so he also offers himself. And when the sacrifice is over the incarnate Jesus remains there mystically, Jesus making the priest JESUS by the transforming union.

Only that the priest does not take this into account for himself, he does not assume the responsibility but no soul like that of the priest has the suitability - by the grace of state, which is to say by the anointing received from heaven at ordination - to mystically incarnate the Word in his soul for his perfect transformation. And this transformation attracts the mystical incarnation in more or lesser degrees.

This is the most powerful and holy means in the priest for his transformation into Me. Because while possessing the Word in the soul, the soul is lost in the Word as a drop of water in the sea, as the sun absorbs the light; the immensity of the sea absorbs the drop.

.... The love for my priests goes beyond what a human mind can comprehend because it is divine. I love them from eternity, in the bosom of my Father, with love from the most depths of my heart, with inconceivable delicacy, with all the power of a saving God.

These are mine by the double donation of my Father and of the Holy Spirit, that they anointed me with the eternal Priesthood. All depends on Me and all are one on Me, their Head, their Heart, their Source of action and life, and I ought to be their very life.

Never will I exhaust speaking of what my priests are for Me, my hands, my laborers, my very Heart and the center of innumerable souls.